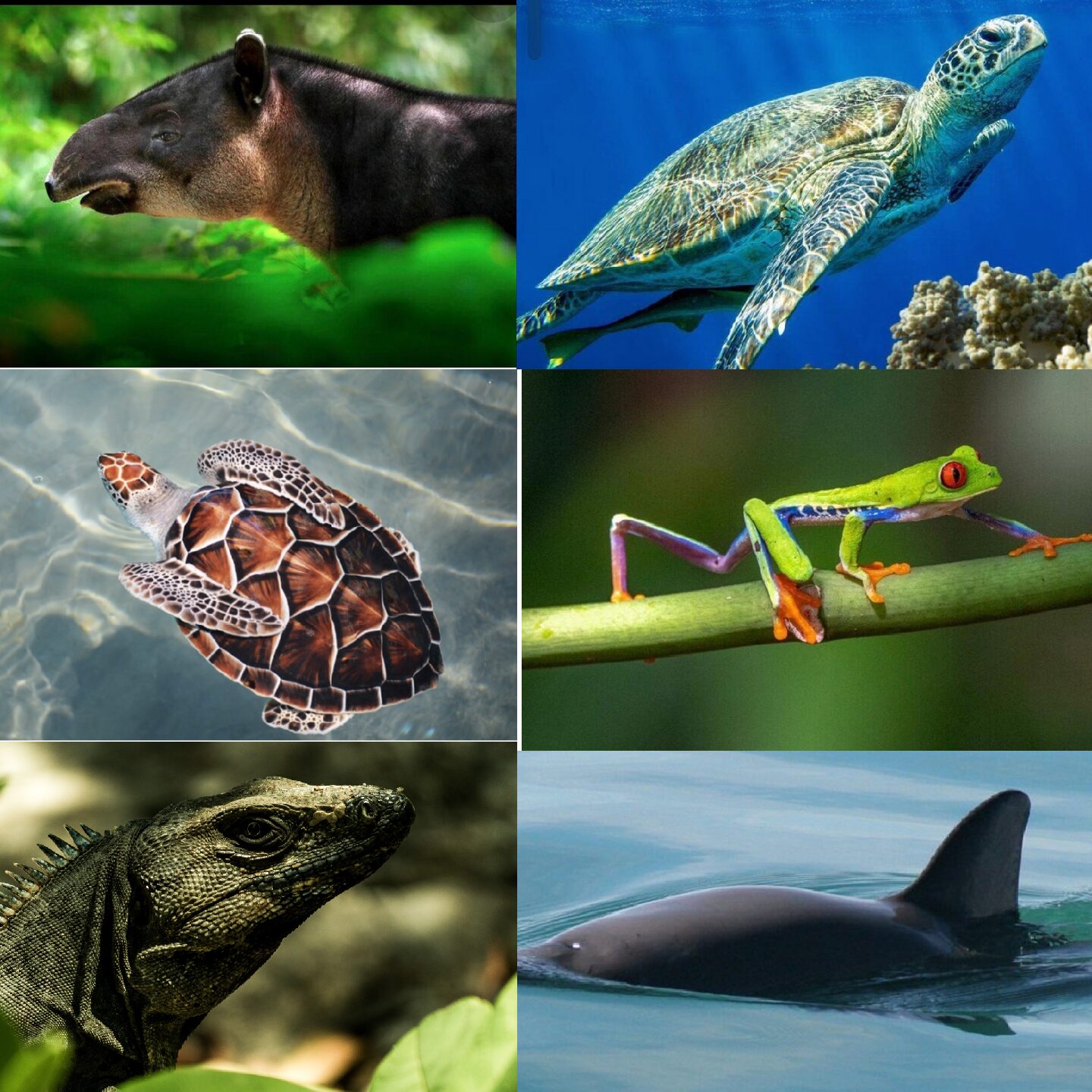 Healthy forests in the world play a critical role in maintaining a healthy climate and preventing the dangers of climate change and global warming. Forests are important carbon sinks, absorbing and storing excess carbon in the atmosphere and emitting oxygen. Tropical forests, which comprise forty-five percent of the world’s forests absorb seven times more carbon dioxide than the amount emitted globally by human activity.

Trees play a key role in local water cycle in maintaining a healthy balance between water on the land and in the atmosphere.  Healthy forests anchor fertile soil to the ground.

That is a huge loss of the world’s mammals, birds, amphibians, reptiles and fish in just five decades.

Humans and their domesticated animals, mainly cattle, comprise ninety six percent of the total mass of mammals living on earth.  Wild mammals are only four percent.

Seventy percent of the world’s plants and animals live in forests and fifty percent in tropical forests.

Tropical forests including the Amazon that span 9 South American countries, the vast Atlantic forests of Brazil, large wetlands such the Pantanal in Paraguay Bolivia and Brazil, the dry forests of the Gran Chaco in the Rio de la Plata and the savannas, rivers and lakes throughout the South American continent, are all being deforested and degraded from the following human activities.

The burning and clearing of forests to create pastureland for cattle ranching. Demand for beef is soaring in North America, Europe and especially in China as many Chinese enter the middle and upper class.

The conversion of natural areas for agriculture, especially large corporate farms of soya beans, that are mostly exported to Europe cattle feed.

Wildfires from climate change that causes drought and global warming.

The exploitation of animals through hunting and fishing at unsustainable levels.

The damming of rivers for hydroelectric power plants.

The International Union for Conservation of Nature estimates that twenty-six percent of the world’s mammals are threatened and places them into the categories of vulnerable, endangered or critically endangered

Of mammal species around the globe which are today threatened with survival, the countries with the most endangered mammals are:

Madagascar, off the east coast of Africa, with 114 threatened mammals.

Indonesia has seen the greatest loss of tropical forests beginning in the 1970s from logging and later the destruction of forests for vast palm oil plantations. Palm oil is used as an ingredient in cosmetics, foods and cleaning products. The orangutan, elephants, rhinoceros, tigers and other species have had precipitous declines in their populations from deforestation.

Let’s take a closer look at loss of natural habitat, forests, wetlands and savannahs in a few different regions of  Mexico and how that impacts the decline of wild animal species.

Mexico is considered a megadiverse country in plants and animals. Together with Brazil, Colombia, Ecuador, Peru, the US, Indonesia, Madagascar, Australia, India, China and the Congo, these 12 countries contain sixty to seventy percent of the biodiversity of the entire planet.

According the UN Food and Agriculture Organization, one third of Mexico is forested. Of those forests, fifty-two percent are primary forests, which are the most biodiverse and absorb the most amount of carbon, essential to fighting climate change.

In 2000 twenty seven percent of Mexico was covered with native forests.

The rate of deforestation in Mexico is among the highest in the world, in fifth place of all countries, with 500,000 hectares of Mexican forests lost each year.

The expansion of agriculture and ranching has been responsible for the greatest percentage of deforestation in Mexico.

The United States has become the largest per capita consumer of avocadoes, with demand increasing 440 percent in the last 20 years.

The popularity in the US of tasty bowl of guacamole and chips with a cold bottle of Dos Equis is causing deforestation and forest degradation on a grand scale in central and southern Mexico.

Avocados are produced in the Mexican states of Michoacán, Jalisco and the State of Mexico with production increasing in Michoacán 511 percent in the last decade.

More than eighty to ninety percent of avocadoes imported to the US are grown in Mexico, with almost all from Michoacán.

Mexican deforestation from the expansion of avocado plantations has been between 5,900 and 8,000 hectares per year.

Avocado trees consume four to five times as much water as the native fir and pine trees that avocado trees replace.

The lack of availability of clean fresh water for homes, farms, ranches and cities is considered one of the top three environmental crises that Mexico is facing. The other two are deforestation and air pollution.

Michoacán is home to some of the most biologically diverse forests in Mexico.  Each year the Monarch Butterfly makes one of the longest migratory journeys in the world, flying 3,000 miles from Canada to the forests of southern Mexico, arriving in the Monarch Butterfly Biosphere Reserve on the border of Michoacán and the State of Mexico.  The outside boundaries of the Reserve are shrinking in size from forest clearing for the planting of avocadoes and illegal logging. Owners of forested land in the Reserve receive about Mex. $683 pesos (about US $32) per hectare from government to preserve the forests. But a farmer who cuts down forest trees in the Reserve and plants avocadoes, earns almost twice as much,  an average of Mex. $1,317 pesos (US $59 per year) per hectare].

The Yucatan Peninsula has lost thirty to forty percent of its original forested areas. The main causes are the expansion of livestock, farms and unplanned urban development, such as in the city of Merida and other tourist zones. There are no effective government policies that prevent environmental destruction of the Yucatan’s forests and other natural habitat.

Each year in Yucatan 20,000  hectares of the original jungle around Merida are lost each year.

The Ria Lagartos Biosphere Reserve, an area of 60,347 hectares on the northern tip of the Yucatan, is one of richest biological habitats in the world, with mangroves, estuaries, lagoons, savannahs and low forests.  The Reserve has been included in the International Ramsar Convention, as a wetland of international importance.

Coastal mangroves are some of the richest biological environments in the world for terrestrial aviary and marine organisms and are one of the most threatened biomes on the planet. The Ria Lagartos Reserve hosts many rare and endangered species including 280 species of aquatic birds that depend on the mangroves for feeding and nesting including the wood stork, peregrine falcon and the American flamingo.  It is one of the main nesting zones of the endangered green sea turtle and hawksbill turtle.  The Reserve is home to 554 vertebrate species, and 142 endemic species that exist nowhere else. Mangroves also buffer coastal land from ocean storm surge that is becoming more prevalent as the oceans rise and powerful storms of the century are occurring almost yearly.

The Reserve has seen the destruction of large section of mangrove forests by local developers  and politicians.  After a national and international outcry, the destruction was stopped.

Environmentalist, Medina Garcia, warns that at this pace of deforestation, there could be no jungle left in the entire Yucatan Peninsula in just 100 years.

Chiapas, the southernmost state in Mexico, is a rich and diverse region of mountains, rain forests, rivers and lakes and is populated by a large, indigenous Mayan population. Despite its abundant natural resources, its population suffers from Mexico’s highest level of poverty.

Chiapas is one of the most heavily forested states in Mexico with natural forest that extended over sixty-four percent of its land area in 2000.

According to Global Forest Watch,  a platform that monitors forests around the world, from just from 2001 to 2018 Chiapas lost 574,000 hectares of tree cover, a reduction of an alarming  twelve percent.  Deforestation continues at about five percent per year.

The top 4 regions in Chiapas with tree cover loss from 2001 to 2019 are Ocosingo, Las Margaritas, Palenque, Chilon and Salto de Agua.

Illegal development of palm oil plantations in Chiapas is today the leading cause of deforestation in the state.  Chiapas has the largest area of land in Mexico that is well suited for the planting palm oil. Chiapas produces seventy percent of all palm oil cultivated in Mexico.

Four palm oil plantations in Chiapas are among the largest in Latin America, according to the Institute for the Promotion of Tropical Agriculture.

The Secretariat of Rural Areas of Chiapas reported there were 64,000 hectares planted with of palm oil in 2017 and the goal is to plant 100,000 hectares.  The government says that southeastern Mexico, that includes Chiapas, has the largest portion of the country’s land that is well suited for palm oil production and that up to 400,000 hectares can be planted there.

The state authorities in Chiapas claim that that palm oil is only being planted on land that is already deforested or degraded, not in locations where healthy, intact tropical forests have to be destroyed.  But many locals claim this is not the case. The Agri-food and Fisheries Information service ( SIAP) estimated that forty-four percent of palm oil is being planted in tropical jungle areas. The destruction of the forests often happens secretly and at night.

Leon Avila, a palm oil researcher at the Intercultural University of Chiapas reported that palm oil plantations have encroached on the Montes Azules Biosphere Reserve the largest surviving portion of the Lancadona Jungle.  The Lancadon Jungle extends from Yucatan in southern Mexico to Guatemala and Belize. It is the largest tropical rainforest in Central America. The native vegetation is perennial high rainforest. It has 1,500 species of trees that grow to an average heigh of 30 meters and often reach 50 or 60 meters. The Lancadon is one of the richest areas of biodiversity in the world and is habitat for twenty-five percent of Mexico’s species diversity. The Lancadon has ten percent of Mexico’s fish species, thirty-three percent of bird species and forty-four percent of Mexico’s diurnal butterflies. Endangered species in the Lancadon include the red macaw, swamp crocodile, the tapir, howler monkeys and spider monkeys. There are rare sightings of jaguars.

Deforestation in the Lancadon began in the mid 1800s from logging. Illegal logging still takes place today. In the 1960s and 1970s the population grew quickly in the highland areas. The government encouraged settlement of the lowlands and for the establishment of homesteads and small farms that depend on slash and burn farming. That practice allows insufficient fallow time for land to recover nutrients and creates soil erosion.

From 1970 to 1990 the size of the Lancadon was reduced by more than thirty percent.  Avila reported to Monga Bay, the international environmental group dedicated to fighting deforestation, that in Chiapas, “palm oil planting does not include effective management of the environment.”  He said that “as palm oil plantations are a monoculture, just one tree species that replaced a rich and diverse forest habitat, walking in an oil  plantation is like being in a desert, with no sounds of birds or animals.”

Brazil, also a large palm oil producer, introduced a program in 2010 to prevent the clearing of primary and secondary forests for the planting of palm oil in the Brazilian state of Para, where most palm oil in the country is grown. The program, Sustainable Palm Oil Production Program, (SPOPP), requires that only areas of already cleared land can be planted. The program has been highly successful in preventing deforestation as ninety percent of new planting was in pastureland not forests.  A similar program could be adopted in Chiapas to prevent deforestation from new palm oil plantings.

The World Wildlife Fund advocates a program where palm oil growers and suppliers are required to adopt and implement a deforestation-free policy of growing and are monitored before they are given a sustainable certification.

The planting of palm oil in Chiapas and other regions of the world, have a significant negative impact on fighting global warming and climate change. Native forests store enormous amounts of carbon dioxide. They are major global carbon sinks that palm oil plantations can not duplicate.

It is estimated that deforestation around the world , including forest fires, contributes fifteen percent of dangerous greenhouse gases.